An outdoor fireplace can be a nice addition to your home, but you have to be willing to take the extra precautions that are necessary. Unlike a barbeque grill, gas or charcoal, that sets several feet from the ground, an outdoor fireplace is low to the ground. As such, it can not be used near the house or on any kind of combustible surface. As long as you’re willing to take the extra precautions, it’s something you can certainly enjoy with a great deal of pleasure.

An element of danger exists with all types of fireplaces, but the potential danger is even greater with portable fire pits, possibly because they are not as permanent as an indoor fireplace. Because a fireplace exists within a structure, it must adhere to existing building codes, but a portable pits relies on the homeowner to make sure that it is used in the safest way possible. The importance of safety when using outdoor fireplaces can never be stressed too much as is apparent in an article that appeared online about a family who sustained $50-$60,000 in damages as the result of a fire pit that was being used on a wooden deck. The patio stones that had been placed underneath the fire pit were unable to prevent the transfer of heat to the deck boards, and the structure caught on fire. 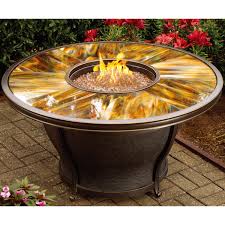 Outdoor fireplaces are usually built into or against a wall, and though this is the most expensive method, the price will depend on your choice of design: a ready built unit or decide to have one custom built. No matter which way you choose, you can expect to pay anywhere between just a few thousand dollars to ten thousand dollars and up for an outdoor fireplace.

In order to assure safe operation and reduce the dangers of outdoor fireplaces, it is recommended that they be kept away from anything that is combustible and not placed any closer than ten feet from the house or other combustibles. Additionally, before retiring for the night, the homeowners should ascertain that the fire is completely out.